Following an archaeological dig with Manor Hall Middle School children near the Southwick Roman Villa site during National Archaeology Week in July, Giles Standing, an archaeologist from Shoreham, will be running an Open Day at the Southwick Society’s Manor Cottage Heritage Centre on Saturday September 20th. Finds from the dig will be on show and members of the public are also invited to bring along their own finds from gardens in Southwick for identification by experts from the Sussex Archaeological Society and the Portable Antiquities Scheme, particularly objects that might be Roman and from the area near the site of the Villa – Southwick Street and Manor Hall Road.

Southwick Roman Villa was an important 1st century AD country residence and has been described as a scaled-down version of Fishbourne Roman Palace, with glass mosaics with gold leaf and a central Italian-style garden. It was excavated in the 1930s and was mostly covered by Southwick Methodist Church in 1965. Giles would also like people to bring in old newspaper cuttings relating to the Villa, or any old photographs or plans they may have stored away. He would like to meet anyone who may have objects from the previous excavations, particularly the 1930s dig, from which a lot of excavated material has gone missing.

The day will be suitable for all ages and will give the opportunity to see and handle real Roman objects from the current excavation in Southwick. The Heritage Centre is in Southwick Street and the event will run from 10 am to 4 pm, admission free. For further information ring Giles on 01273 440114. 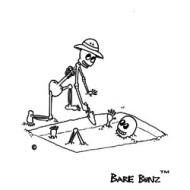 There are updates on current excavation at Blacksmiths Corner on the excavation site.click here.
Posted by Arch man. at Tuesday, August 26, 2008 No comments:

'Our Sponsors for the excavation at Blacksmiths Corner.

May Gurney.(link) is proud to assist Worthing Archaeological Society in their dig at the Roman Villa excavation, Blacksmiths Corner, Walberton.'

Some of the links, ie, Binsted, Warminghurst are at present down, they are being migrated to a new host.
Posted by Arch man. at Monday, August 11, 2008 No comments:

Field work.
WAS FU have been asked to participate in a professional excavation being undertaken as part of the extension of the hospice in Titnor Lane.
The aim is to undertake a 2 week excavation starting on 8th Sept, within the overall site. The area assigned to WAS will be 20m x 20m and trial excavations have revealed multi-period activity from BA to post-Roman.
We would be undertaking the work under the guidance of the Professional Unit (still at tender stage) and members of the public will be invited to take part (having taken temporary membership of the society).
I appreciate that this follows on very shortly after our summer excavation - but thought it too good an opportunity to turn down. So if you are interested and would like more information - please let me know.
Also, the project team is trying to get together 10 metal detectorists to go over the area - probably in early August - but needs to be confirmed. So if you would like to volunteer then please again let me know.
Many thanks, reply direct to Field unit director Keith Bolton.
keith
Posted by Arch man. at Friday, July 25, 2008 No comments:

This August we will be continuing our excavation of the Roman site at Blacksmiths corner.
Dates are from Saturday the 16th August until the 31st of August.

There will be a collecting bucket for donations, which will be used to offset the cost of the two week excavation. Soft drinks will be available on the open days for visitors.

Please advise the dates you are able to attend.

If you are unable to dig, no problem lots of other work to do, finds processing, washing finds on site, talking to visitors, etc. 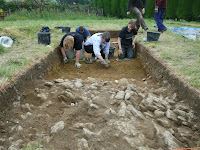 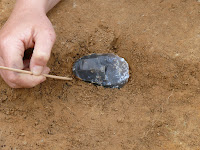 The last Neanderthals of revealed through new study.

New archaeological excavations in West Sussex, funded by English Heritage, have thrown new light on the last Neanderthals hunters of . The site, situated on a sandstone ridge near the town of , is emerging as important in explaining the extinction of our closest ancestors.

The team, led by Dr Matthew Pope and of Archaeology South East based at UCL, is undertaking the first modern, scientific investigation of the site since its original discovery. This occurred in 1900 when construction of a monumental house known as ‘Beedings’ revealed some 2,300 perfectly preserved stone tools from fissures encountered in the foundation trenches.

Only recently were the tools recognised for their importance. Research by Roger Jacobi of the Leverhulme funded AHOB Project showed conclusively that the Beedings material has strong affinities with other tools from northern dating to between 35 - 42,000 years ago. The collection of tools from Beedings is more diverse and extensive than any other known from the region. It therefore offers the best insight into new light on the technologically advanced cultures which occupied before the accepted appearance of our own species in the region.

“Dr Jacobi’s work showed the clear importance of the site. The exceptional collection of tools appears to represent the hunting kit of Neanderthal populations only a few millennia from complete disappearance in the region.” says Dr Matthew Pope. “Unlike earlier, more typical Neanderthal tools these were made on long, straight blades. Blades which were then turned into a variety of bone and hide processing implements as well as lethal spear points.”

“The real possibility that they were left by some of the last Neanderthal hunting groups to occupy northern Europe is an exciting one, and the impression they create is of a population in complete command of both landscape and natural raw materials with a flourishing technology - not a people on the edge of extinction.”

“At Beedings we’re building on the earlier work carried out by Dr Roger Jacobi to reveal as much as we can about the original site,” said Dr Pope. “Our excavations, allowed only through the generosity of the current landowner, have proved beyond doubt that the material discovered here was genuine and originated from fissures within the local sandstone. A further surprise has been the discovery of older, more typical Neanderthal tools, found deeper in the fissure. Clearly, Neanderthal hunters were drawn to the hill over a long period time, presumably for excellent view of game-herds grazing on the plains below the ridge”

The excavations suggest the site may not be unique. Similar sites with comparable fissure systems are thought to exist across south east . The project now aims to prospect more widely across the region for similar sites.

, Head of Historic Environment Commissions at English Heritage, said: “Sites such as this are extremely rare and a relatively little considered archaeological resource. Their remains sit at a key watershed in the evolutionary history of northern . The tools at Beedings could equally be the signature of pioneer populations of modern humans, or traces of the last Neanderthal hunting groups to occupy the region. This study offers a rare chance to answer some crucial questions about just how technologically advanced Neanderthals were, and how they compare with our own species.”

Members of the society enjoyed a walk around Chithurst , just over a week ago, despite it being a slightly wet day , but warm it was enjoyed by all, on our visit to Iping we came across the name on a house called Blotting House., Plus another called the Mill house, and yes the mill did make blotting paper. According to Stidder and Smith -
Watermills of Sussex, in the late 19th century white and colored blotting
paper was made on a single 60 inch machine. It looks as if blotting paper
was made there until the mills were destroyed by fire in 1925.more information click here

Thought this may be of interest.

March/April, surveying and geophysics/ recording work, at Parham, and Slindon plus, Saddlescoombe farm.

June, Beedings, date to be announced, possible over a period of 2/3 weeks.

June /July surveying/ recording , Moot mound, Gumber airfield site, plus various other sites on the Slindon estate, including Round Barrows.

, at Gumber farm end to be recorded, this is to compare the damage by Badgers, since last survey two years ago.

Please make note of above dates, and please let me know the dates you are able to attend, as far as you can.

This is the link to society walks. click here.
Posted by Arch man. at Sunday, February 17, 2008 No comments:

A new web site is in the process of being built, so its only in Beta stage at present, it will cover the archeology of Sussex over the past 100 years or so, work covered will include,the work of John Pull, Con Ainsworth, Fred Aldsworth,. The main basis of the site will be the connection with Worthing Archaeological Society which was formed in 1922.
Sussex Archeology. Link. note links underlined on new site are not working at present.

This is very interesting the link below will take you too the full discussion.

A site to visit.

Welcome to this site.

Hello, if you leave a comment on this site, please remember to leave your email address, otherwise i cannot reply to you, no email no reply.

The new arts center for Shoreham.