The Society Field unit is running 2 major excavations this summer.
The dates are:

1.Gobblestubbs Copse. Start. July 8th. Saturday. For one week. This is with English heritage. Confirmation of this date, still to be fully confirmed,

This is a continuation of last year’s excavation.
Posted by Arch man. at Thursday, April 27, 2006 No comments: 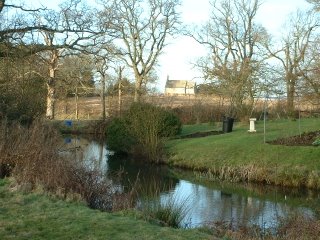 On Tuesday night Mike Standing gave the Society a very interesting lecture on the Archaeology of Buildings, and some thought provoking fields of investigations were discussed.
Such diverse areas of investigation that has yet to be undertaken, is the recording of moated sites in the Arun valley, and I suspect that applies also to the Adur valley and other areas, perhaps a future project for some members of our Society.

Other areas of recording that I must admit I had not thought of is the recording of certain farm buildings, not the barns, but the smaller structures, such as pig stys,
workshops and alike, and the outside privy, none of the buildings have really been recorded in any depth, and they are disappearing fast.

Are there any members out there that may like to undertake one of the areas of recording, it would be a very good project to undertake, it could be in the first instance a photographic recording, and can be over a long period of time, but not to long as the features are disappearing.
Posted by Arch man. at Wednesday, April 12, 2006 No comments: 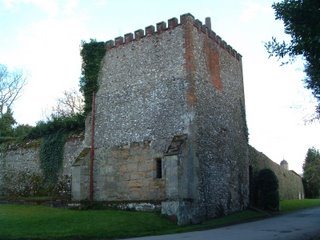 Slindon Walk. Saturday 6th May, time 9.45 am. Meet at the National Trust Estate Base camp, this is next to the entrance to Slindon College.

All new members, and those who may wish to join us.
Picture of Medieval tower on estate.

For those of you who belong to the Field Unit but have never or rarely visited the estate, we will be having a walk around the southern and middle sections of the NT estate on Saturday 6th May.

If people only want to do the morning walk - that will be fine.

Meet at the Slindon NT office/Base Camp at 9:45 for a 10:00 start. For those not interested in the walk, there will be other activities.... info to follow.

If you don’t know the way to Slindon, please let me know and I will provide details.Email to :
rodney_gunner@hotmail.com
Posted by Arch man. at Sunday, April 09, 2006 No comments:

The University of Sussex M.A. training excavation is over, there were not a lot of fines, one or two sherds of late medieval pottery, but otherwise mainly some of the geology of the area was exposed, in the main sandstone.
But the students learned a lot about recording techniques, which was the aim of the excavation. Sally Montstephen was our member on this excavation.

Another M.A. training excavation is being undertaken at a location near to Goodwood, this involves one of our members Pat Jones, at the time of writing I do not have any details of the excavation, except to say that I understand that it is very impressive.

Another area close by the church, produced on a very short field overservation walk, sherds of early course medieval pottery, this is close to the location of possible area of early medieval occupation, a field walk may be planned for this area later this year.

Work is continuing on researching the area, and extracting information from files at Worthing museum about the 1960s excavation of the tile kiln there, which was undertaken by the late Con Ainsworth.
Much valuable information has come to light and in due course it is hoped that a report will be produced.
Emma Tristram, is also researching the area, and is doing a lot of very valuable field research work, and is discovering a lot of lost information about the area, and its inhabitants over the periods of time. See http://binsted-discoveries.blogspot.com
Posted by Arch man. at Monday, April 03, 2006 1 comment:

Welcome to this site.

Hello, if you leave a comment on this site, please remember to leave your email address, otherwise i cannot reply to you, no email no reply.

The new arts center for Shoreham.